Wouldn’t we all want to know the future?  Let me rephrase that … 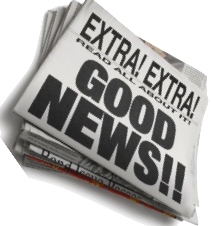 wouldn’t we all want to know the future if everything in the future were going to be okay!  The psalmist sings, “Lord, make me know your ways.”  It’s a little like asking, ‘Let me know the future.’  Maybe … but not if it’s bad news.  Good news is what Jesus is speaking when he arrives in Galilee.  Mark tells us that “Jesus came to Galilee, proclaiming the good news of God.”  Jesus is asking us to believe in his message – “repent,” he says, “and believe in the good news.”   And yet, our society doesn’t appear to see what Jesus proclaims as good news.  Why not?  It’s a question I ask myself over and over.  We seem challenged today to get the message out.  Does it have something to do with the way we are proclaiming it?  Are we presenting the message from the Gospel, or are we presenting our interpretation of the Gospel?  In a world that seems filled with bad news, or at least where media attention seems focused on the bad news, wouldn’t good news go a long way to making us feel happier?  Anne Murray sings “I sure could use a little good news today.”  Couldn’t we all?

The story Mark presents us is slightly different than John’s version of the same story we heard last week, but the essential ingredient is the same: Jesus invites Andrew to “come” and he does.  “Come and see,” John says; “come follow me,” Mark says, but ‘come.’  Something about Jesus was so charismatic that Simon, Andrew, James and John “immediately” left everything and followed Jesus – a Nazarene and a carpenter.  Did they know him?  One writer suggests that if they didn’t know him, they at least knew of him.  What was it about Jesus that captured their imaginations and their attention, causing them to leave everything behind and follow him?

The invitation Jesus gave those men 2000 years ago has not changed.  Jesus is still preaching the Good News of God, the kingdom of God has come near, and we are still called to repent and believe.

I have a dear aunt who will be 89 years old next month.  She is a Sister of Presentation in St. John’s, NL; in fact, has been a nun for 72 years.  Not shy about speaking her mind, she will say to me: “Are we (and by ‘we’ she means the Church) even preaching the Gospel anymore? Are we so bound by what we think the message of the Gospel is, that we are unable to see that maybe what we are speaking is not what the Gospel is actually saying?”

Very early in his pontificate Pope Francis invited Christians everywhere to a “renewed personal encounter with Jesus Christ, or at least an openness to letting him encounter them,” (Evangelii Gaudium#3) because he feared that “God’s voice is no longer heard, the quiet joy of his love is no longer felt.” (EG#2) “The joy of the Gospel fills the hearts and lives of all who encounter Jesus,” (EG#1) Francis begins.  This is what Andrew, Peter, James and John were mesmerized by, and why I believe they were so quick to accept his invitation.  We need to listen for that Good News, because Francis says: “The Lord does not disappoint those who take this risk; whenever we take a step towards Jesus, we come to realize that he is already there, waiting for us with open arms.” (EG#3)

Take the step.  Come and see.