HomeBlogHe has gone out of his mind / He has Beelzebul, and by the ruler of the demons, he casts out demons

He has gone out of his mind / He has Beelzebul, and by the ruler of the demons, he casts out demons 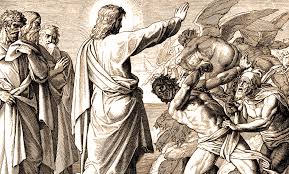 Even for Jesus who was so misunderstood and opposed, this seems to be just a bit too much. His family thinks he has suffered a mental breakdown (at the best) and the religious authorities say that he is in league with the devil. What brought things to such a head so early in Jesus’ mission (we are only in Chapter 3 of Mark’s gospel)?

A quick look back shows us that Jesus became very popular because he performed many astounding things. He drove our demons, healed the sick, forgave sins, cured the leper and the crippled. It would seem that any one of these would draw attention to Jesus and the sheer number of them was destined to make him popular. At the same time, though, we have no indication that his popularity was a sign that people actually believed his message, that they were being converted to his message and his way of living. This is especially true of his family and the religious leaders.

The gospel gives us little hint of why his family develops the thinking they do except that so many people were making demands on him that they [Jesus and his disciples] could not even eat. It still seems to be a big leap to go from not having time to eat to being out of one’s mind. Were they moved by a sincere concern for his health and safety or were they motivated by a lesser motive like jealousy? We simply do not know, but it is obvious they would like things to return to normal, to have Jesus return to being his old self.

The religious authorities, on the other hand, are concerned that he is not adhering to their interpretation of the law, and yet is attracting a large following. As such he poses a threat to the established religion and their position and power within it. They have trouble finding a justification for their opposition so they come up with the weird claim that Jesus is doing all these good things by the power of the devil. Jesus quickly counters by pointing out the absurdity of the claim (And if Satan has risen up against himself and is divided, he cannot stand….). It took me a lot of years to grasp the meaning of Jesus’ words about the strong man. I first understood them as just a general comment but have come to see that Jesus is claiming that he is the strong man and that he has already plundered Satan’s house. Far from being the instrument of Satan, Jesus renders him powerless.

Jesus then speaks of the Holy Spirit when he addresses the comment, ‘He has an unclean spirit.’ The reality is that Jesus performed all these good works through the power of the Holy Spirit and the works themselves were evidence of this. To reject Jesus and his works and message is to deny the power and work of the Holy Spirit, and if one denies the Holy Spirit it is impossible for that person to know and draw close to Jesus. So in evaluating a leader or a movement, both in the church and elsewhere, we must carefully discern its validity and not be too quick to reject. Otherwise, we are like the relatives who want Jesus to cool things down a bit for their comfort and ease of mind, or like the scribes who seek to protect the status quo and thereby reject the work of the very God they seek to protect.

So it is good for us to pray with the Psalmist:

Out of the depths I cry to you, O Lord.

Let your ear be attentive

To the voice of my supplications.