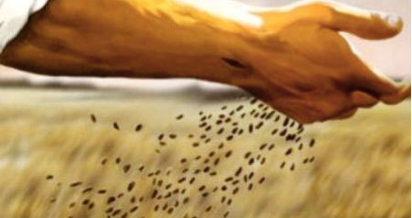 Every time we gather for Eucharist, the first reading we listen to is from the Hebrew Scriptures (what we used to call the “Old Testament”). The older the writing is, the further removed it is from our own experience. So, we need to get into the context of these ancient texts if they are to have something to say to us in our present-day context. Whenever I try to do that, I’m always surprised that their context, way back then, is never totally different from our own context now. Human behaviour and human psychology have changed very little in 4, 000 years.

Ezekiel, whom we heard from in that first reading, lived 2, 600 years ago. As a 25-year-old, he saw his beloved country, Judah—God’s Promised Land– attacked and defeated by the Babylonians. He saw God’s plans for God’s Chosen People dashed as their temple was destroyed, the holy city of Jerusalem sacked, and all the leading citizens—including Ezekiel—deported to Babylon. God’s covenant that said, “I will be your God and you will be my people” seemed to be finished and over. Five years into captivity, God called Ezekiel to be his prophet. He told Ezekiel to tell the people that not all is lost. What they could not do for themselves–because they were powerless in this foreign, pagan country–God would do for them.

A little digression. Does anyone know what the official tree of New Brunswick is? It’s the balsam fir. For the Jewish people, in Biblical times, the mighty and noble cedar—the cedar of Lebanon—was the un-official tree of the Jewish people. All they had to do was see a cedar, and they would be reminded of the time of King David and King Solomon, the kings who reigned during Judah’s glory days. Being captive in a foreign land, where everything that could go wrong did go wrong, was far from the glory days. Yet, God would take a sprig, a clipping, from the mighty cedar and plant it on a hill in enemy territory, Babylon, to remind the people that this sprig will grow into a might and noble tree once again. It would be a symbol that God had not abandoned them in their worst hour but would make this enslaved people rise again.

God was going to take something small and seemingly insignificant—a sprig of a tree–and make a symbol of it reminding the people that in their hardship, they were not forgotten. A little like Eucharist isn’t it? Without faith, all we have is a little bit of bread, a little bit of wine, and prayer book. But that little bit of bread and wine in the presence of those who have faith, is God who promises to be with us and ultimately transform our pain into healing, our loneliness into communion, and even our death into life. Jesus does not speak about the majestic and noble Lebanon cedar, but he does speak about the lowly mustard seed, the smallest of all seeds. He says God’s kingdom is like that seed. Where you find the kingdom, you have also found the King. It seems God delights in taking what is insignificant, defeated, and even dead and bring abundant life out of it.

There is no situation you are living now or have ever lived that is beyond redemption, beyond hope. Even in the most despondent experiences of your life, God was there sowing seeds of hope. When we could not do something for ourselves, God was doing it in us and through us. Like the farmer who scatters seeds on the ground, we are really unaware of how the seed sprouts and grows and produces a stalk and then a head and then grains. This is a mystery. This is God’s grace at work. Where we see blocks, God sees open highway. Where we see failure, God sees the possibility for success. Where we see vengeance, God sees pathways to forgiveness. Where we see a mustard seed, God sees a mustard tree large enough to house every bird possible.

35 years ago, while working on my biology degree, I read a book called The Growth of Biological Thought. It was a horribly boring book, but I got a good quote out of it. It read: “The creative mind is able to think something that nobody has thought yet, while looking at something that everybody sees.” Jesus, the most creative mind to ever walk the earth, saw the Kingdom of God when everybody else only saw mustard seeds.

At the Catholic Church in Sackville, there is a large sign just outside the church building with the name of the church, St. Vincent’s, and the Sunday Mass time prominently displayed. However, on the back side–only visible to someone leaving the building–20 years ago, I had someone paint the words: We walk by faith, not by sight. Those are the words St. Paul wrote to the Corinthians. St. Paul is not talking about blind faith, where you simply believe upon someone else’s authority. Walking by faith, not by sight, requires trust in a reality that we cannot always prove with our five senses, including our sight. The farmer trusts that once the seed goes into the ground, and he does not see it for the next two weeks, it will sprout and grow by a generative power that he is not responsible for nor in control of. Farmers, by nature, walk by faith and not by sight all the time. They intuitively know the potential of the smallest of seeds to bear an abundant crop, in time.

When Jesus wanted to tell us about the most important thing of all, the Kingdom of God–the Reality upon which all reality is based upon—he did so in parables. The role of parables is not to affirm in you what you think you already know. Quite the opposite. Parables, like Jesus himself, are subversive. Parables are blind-sided storytelling. They go to the core of what we unquestionably hold and question it. Nothing is safe in the realm of parables. Parables turn our world upside down, or, perhaps it is truer to say, “right side up.” Parables seem to say, “Look a little deeper, a little harder.”

“The creative mind is able to think something that nobody has thought yet, while looking at something that everybody sees.” Ezekiel saw the sprig of a cedar, and it was enough to give his people hope. Jesus saw a mustard seed, and it was enough to give us a glimpse of God’s immense Kingdom. We see a little bit of bread and wine with eyes of faith, and it, too, is more than enough.