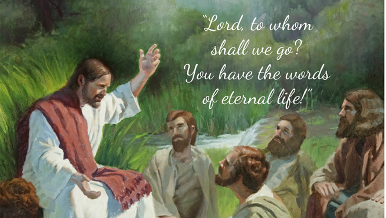 I think the three greatest gifts God ever gave us are: the gift of our very own lives, the gift of God’s life in the form of Jesus of Nazareth, and the gift of free will (the ability to make choices, good or bad. We are not robots programmed by God; we are autonomous beings). I would like to focus a bit on this third gift, our freedom in making choices, because it seems to be the focus of both the first reading (Joshua 24) and the gospel (John 6).

Again, a little bit of context is helpful. Let’s start with that first reading from the Book of Joshua. You may not know too much about Joshua, but you have certainly heard about Moses. Moses, under God’s guidance, led the Hebrew people from slavery in Egypt to the Promised Land. In that journey, which took 40 years because of peoples’ stubbornness, God renewed His relationship with the people in the form of an agreement, a covenant. This covenant came in the form of the 10 Commandments. Moses himself did not make it into the Promised Land, but his successor, Joshua, did. Once in the Promised Land, the Hebrews settled in a place called Shechem; that’s the first line of today’s first reading: “Joshua gathered all the tribes of Israel to Shechem.” Geography is important in the Bible and in our lives. (You’ve all been to a physical place that makes your soul soar. Cadillac Mountain in Bar Harbour, Maine, and the hills of Cape Breton are two places that do this for me). Shechem, in the Promised Land, is like that for the Jewish people, and it becomes the capital of the new nation of Israel.

More context. Shechem sits is a valley between two mountains: a lush, forested mountain called Mount Gerizim and a barren lifeless mountain called Mount Ebal. It is from between these two contrasting mountains, one that is teeming with life and another that is barren and sterile, that Joshua addresses the people. He tells the people that they have free will to make a choice. They are free to choose to worship the pagan gods of the past or they can choose to worship the Lord God who brought their ancestors out of the land of Egypt, the land of slavery. He does not tell them what to choose. Like God, he has too much respect for people’s free will. Instead, he reminds them of God’s great past and present deeds and simply says, “Choose this day whom you will serve. As for me and my household, we will serve the Lord.”

The people, standing between a lush mountain and a barren mountain, chose freely to follow the God of life. Similarly, in the gospel passage we have today, Jesus teaches his followers and then sets them free to follow the teaching or reject it and walk away. Most chose to walk away; he forced no one to stay. That’s how much respect Jesus has for us that he would not violate our free will. Instead of twisting our arm, forcing us, coercing us, or filling us with guilt, he simply stands between two mountains with a loaf of bread in one hand and a cup of wine in another and invites us to eat his flesh and drink his blood. If we do so, we will have eternal life within us. He lays life and death before us and patiently waits, suffers, and hopes we will choose life.

Jesus says that if we are drawn to him, if we are drawn to life and not death, it’s because God has previously softened out hearts to his message. “For this reason, I have told you that no one can come to me unless it is granted them by my Father.” In other words, you follow me now because you were first open to the promptings of God in your life, whether you were aware of it or not. This openness to God’s promptings in often unconscious chosen, haphazard, random, and can even occur in your dreams, your subconscious. But when we deliberately open ourselves to God’s will, when we purposefully make room for prayer each day, then this is what we call faith!

So, before we can say yes to Jesus, we already have the soil of our souls prepared by God. When we live by faith, we realize God prepared the soil, Jesus planted the seed, and we are called to bear fruit. Today’s gospel passage ends with Peter making a profession of faith. “You (Jesus) have the words of eternal life…you are the Holy One of God.” The only way he could say this, according to Jesus, is because the Father had already prepared the soil within Peter. It is like God has placed truth within us, but we do not recognize it as such it until we encountered Jesus, who is Truth itself. In the encounter, the inner recognizes the outer; truth recognized truth. We did not get it on our own; we were prompted by God. That’s OK. The next time, we will need less prompting, because we will know what we are looking for. Prayer to God will have imprinted the truth within our souls already. All we have to do is see that inner truth being mirror in the outer world and celebrate it.

In another gospel account, Jesus asks his disciples, “Who do you say that I am?” Peter, like in today’s gospel, gives a profession of faith that is brilliant. He says, “You are the Christ, the Son of the living God.” Jesus praises him, and then in a bit of humour says, “You didn’t get this answer on your own, Peter. Flesh and blood did not reveal this to you, but it was my Father in heaven who revealed this to you.” In other words, “You are too slow to get this on your own…you don’t have enough brains (enough flesh and blood) to come to this conclusion on your own. You got help with the test. My Father revealed this to you, right?” When God helps us with the test, this is what we call prayer and discernment.  Prayer and discernment are absolutely essential if we are to choose between right and wrong or make any worthwhile decisions in our lives. We need help, and it’s more than OK to ask.

On the cusp of a federal election, where the choices of leadership have never been so pathetic, we stand between two mountains, waiting for a prophet voice like Joshua’s—or better still, Jesus–to guide us. It’s hard to know, in a world where things are rarely black and white, what to choose and how to vote. One thing the Catholic Church has never waiver on is its support of life at every stage, from womb to tomb. With the Liberals, N.D.P. and Green party’s official bans on running candidates who are not pro-choice–thereby eliminating a candidate who has a conscience–and the Conservative who are only slightly better, it leaves conscientious voters in a near impossible situation. When delivery rooms closed this week in a number of New Brunswick hospitals due to staff shortages, not a word of this was mentioned from our prime minister and leader of the N.D.P. except to threaten our premier for not providing more opportunities for abortions. When you get to this stage, you know you are not a discerning people. Without prayer and discernment, we are still relying on flesh and blood, and not on God, to form our decisions.

I long for the day when we can join our voices with the voice of Peter, still ringing true 2000 years later, “We have come to believe and know that you are the Holy One of God.” When we can say that, we will also be able to say with Joshua, without any apology, “As for me and my household, we will serve the Lord.”