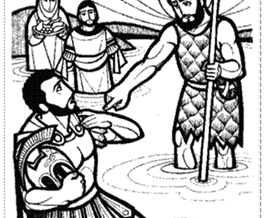 As I see it, the problem with sin is not so much the sin itself, but it’s the remembering and identifying with the sin. That’s the problem. What does it mean to say Jesus is the sinless one? I think it means he never identifies with sin. He never holds himself to past mistakes. And because he never holds himself to the past he has no need to hold others to their past sins.

We can learn from our past sins (and we should learn from them otherwise we’ll repeat them), but we should never identify with them. What’s the problem with identifying with past faults, flaws, sins, or poor decisions of he past? The problem is we won’t bear fruit in the present. Jesus says, “I appointed you to go and bear fruit, fruit that will last.” In another part of Scripture Jesus asks, “Can a good tree bear bad fruit, or a bad tree bear good fruit?” The answer to both those questions is a resounding “No!” In other words, if you identify with your past sins, if you think you are the bad tree, you’ll never bear good fruit. But if you identify with the fact that you are the beloved child of God, you’ll do the work of the child of God; you will bear good fruit.

700 years before the birth of Jesus, the Prophet Isaiah reminded the Jewish people in exile not to remember their sins, the very things that caused them to be deported to Babylon in the first place. Speaking the words of God, Isaiah told the captives about God’s liberating forgiveness and love. He said, “Do not remember the former things, or consider the things of old.” Why? Becausethat will only keep you in the past, and paralyze you from bearing fruit in the present. Pay attention instead to the present moment, because right here, right now, “I am about to do a new thing.” If God has no interest in holding us to our past sins, who are we to do otherwise?

The author of the Book of Ecclesiastes says, “There is nothing new under the sun.” Nothing. And when I look at the 6 o’clock news, it’s hard to argue against that pessimistic line. We live pretty much in a tit-for-tat world. In that world, what I give you—good or bad—you give me in return. It takes very little for a situation to escalate into violence in that kind of a world. The vengeance button in each of us is more accessible than we want to admit. Violence and counter violence seem to be the very name of history, one war after another.

There’s nothing new under the sun, except forgiveness. Forgiveness alone can break the spiral of shame, hatred, prejudice, and ultimately violence. Forgiveness has nothing to do with logic; in fact, it’s the final breakdown of logic. My sense of logic, my underdeveloped sense of justice always has me saying, “You owe me. You’re indebted to me. You better show me how you’re going to make this up to me. This is what I get for all that I have done for you!” There’s nothing new in that world or in that way of thinking. Nothing new can move forward. Forgiveness, the final collapse of logic, opens up new possibilities and new starts to old relationships. Logically, the Risen Lord, in my mind, should have given the apostles who abandoned him in his greatest need a tongue lashing or meted out some kind of punishment. Instead, the past is forgotten and a future open up with Jesus breathing forgiveness upon them.

A word about forgiveness and powerlessness. This insight comes to me, once again, from Fr. Richard Rohr. It comes from a book he wrote entitled Jesus’ Plan For A New World. He writes: The mystery of forgiveness is God’s ultimate entry into powerlessness. Look at the times when you have withheld forgiveness. It’s always your final attempt to hold a claim over the one you won’t forgive. It’s the way we finally hold on to power, to seek the moral high ground over another person. I will hold you in unforgiveness, and you’re going to know it just by my coldness, by my not looking over there, by my refusal to smile, or whatever. Oh, we do it subtly to maintain our sense of superiority. Non-forgiveness is a form of power over another person, a way to manipulate, shame, control and diminish another. God in Jesus refuses such power.

God, born in the form of a powerless baby, came to us that first Christmas. God comes to us tonight, equally powerless, and says, “I hold nothing over your head, especially not you past sins.  So, “Do not remember the former things, (I don’t) and do not consider the things of old, for tonight I am about to do a new thing. With forgiveness, EVERYTHING becomes new under the sun.”