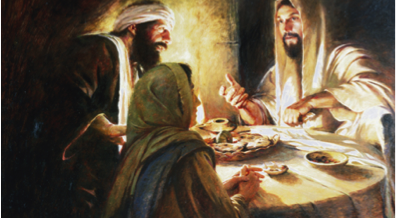 There are at least four times in the gospels where Jesus mentions how “the Son of God must go to Jerusalem, to suffer, to die, and to rise again.” Each time, the disciples try to either change the subject or convince Jesus not to go. So, it is not surprising, that even after the resurrection, the disciples are still avoiding Jerusalem. None of us wants to deliberately go to places that hold memories of suffering, pain, and death, even if they also hold memories of resurrection and life. But suffering, pain, and the disappointments of life, have ways of revealing truths to us in ways that joy, happiness or avoidance simply cannot.

I told you Luke is an excellent storyteller. Every time a storyteller does something, he/she has to tell you why they did it. So, let us get into the story. Luke tells us three things about these disciples: 1) they’re going away from Jerusalem; they’re going nowhere, 2) they are sad (they stood still looking sad), and 3) they don’t recognize the Risen Lord as he walks with them (Jesus himself came near and went with them, but their eyes were kept from recognizing him). So, if a storyteller is good, he has to eventually tell you why the disciples do not recognize Jesus, and why they are sad.

Now the reason they do not recognize Jesus is not because in his resurrected state he has lost 20 lbs and got a got a haircut (many of you have put on 20 lbs and not had a haircut since COVID-19 hit!). The reason they did not recognize him is because they never saw him. We do not see things as they are, we see things as we are. We all see through filters. We see people, not as they are, not in their truth; we see people as we would like them to be. Jesus asks the disciples, “What are you talking about as you walk along?” He not asking them a hard question; he is only asking them to share with him what they have already been sharing with each other. Then comes some beautiful irony as Cleopas says, “Are you the only one in Jerusalem who doesn’t know about the things that have taken place there?” It’s ironic, because Jesus is the only who does know what has taken place in Jerusalem. And these two are about to tell us that they haven’t got a clue about what happened in Jerusalem. This next line is a wonderful line as Jesus gives them the rope to hang themselves. He says, “What things?” They are about to tell Jesus about this guy named Jesus. What comes next is the longest speech in Scripture, because when you are wrong, you are really wrong. We have all put our foot in our mouth. We have all over-stated our point. We have all made fools of ourselves.

So, here is the disciples’ version of what they think happened to this guy named Jesus during his last days in Jerusalem. Their version has four points:  1) He was a prophet mighty in word and deed; 2) he was handed over by our chief priests and leaders, he was condemned to death and crucified; 3) we had hoped that he would be the one to redeem Israel; 4) women from our group went to the tomb, but they did not find his body there.

This is not a bad version in my mind. These disciples seem to have lined up all the facts. But Jesus is not a happy camper; the resurrected Christ is ticked off. We have to take his disappointment seriously. He is really not impressed with their version of the Jesus story, because their story is so far from the truth. Jesus calls these two disciples “fools”. “Oh, how foolish you are.” Let us take a closer look at their version of the story and why he calls them fools.

Who was Jesus, then? In Luke’s gospel, it is like Jesus was telling us, “From the very beginning when I was laid in a manger, a food trough for the animals, I was food for the world. I was always food for the world. And on my last night on earth I asked you to eat my body and drink my blood so that you would remember me. My sufferings were nothing like you think. My sufferings were my continuing to give food to the world even as they would not take the food I gave. I never stopped giving it for even one moment. I asked you to do one thing, and one thing only, in order to remember me: I asked you to eat my body and drink my blood. Period. That’s it. Nothing more, nothing less. But look what you put in place of the one way I asked you to remember me: reputation, victim, failure, and dead man. I was never simply a reputation. I was never a victim. I was never a failure. And I certainly was never a dead man.

Now we know why the disciples do not recognize Jesus. It is because, instead of looking for the truth of who Jesus was, they were preoccupied with looking for a reputation, a victim, a failure, and a dead man; none of those ever existed in Jesus. We do not see things as they are; we see things as we are. Jesus was never a victim. Oh, on the surface he was a victim of a kangaroo court, tremendous suffering, and a horrendous death. Victims do not go looking for trouble, and they do not deserve the suffering that comes their way. Victims have their lives taken from them. On one level, one superficial level, Jesus did have his life taken from him, but that is not the deeper truth of who Jesus was. Jesus told us himself: “I have the power to freely lay down my life and the power to take it up again; no one takes it from me.” A victim is someone who has life taken from them, and they are powerless to do anything about it. As Jesus stands accused before Pontius Pilate, Pilate says to him, “Don’t you know that I have the power to crucify you?” Sorry, Pilate, you’re a day late. There was nothing left for you to take as Jesus had already given his life away the night before at the Last Supper— “this is my body given for you.” Before the soldiers could take his life, Jesus had already given it. So, Jesus is not a victim. Yet we have Eucharistic Prayer 1 stating this: we, your servants and your holy people, offer to your glorious majesty from the gifts that you have given us, this pure victim, this holy victim, this spotless victim. Victim, victim, victim. Those who wrote this prayer, never read or understood today’s gospel story. What a shame!

We can remember Jesus as a victim and spend the rest of our lives sad, like these two disciples, and guilty. Or, we can remember the truth about Jesus as the one who freely laid down his life for us and spend the rest of our lives grateful. I am not saying there are not real victims in society; there are. But if you want to get sad, like the disciples on the road to Emmaus were, just keep remembering your loved one who have passed on as reputations, victims, failures, and dead men and women. You will get really sad. And now we know why the disciples were sad. Their memories were so flawed.

Our obituaries are full of reputations and victims… school teacher for 23 years, please donate to the Cancer Society. Her reputation was that she was a school teacher, and she was a victim of cancer. Reputations and victims all over again. What a shallow truth! What a sad way to remember our loved ones. If we remember those who died of the pandemic or of the mass shooting in Nova Scotia as reputations and victims then we will get sad. We will be on the way to Emmaus, a place that does not exist, and we will be going nowhere. The way the media almost exclusively describes the 22 who were killed in Nova Scotia is with the word “victim.” What an impoverished word to describe the richness of their lives. What was officer Heidi Stevenson doing at the time she was shot and killed? She was responding to a call about an active shooter. Before the killer could take her life, she was already giving it. On the surface, Heidi was a victim. But in reality, that is not true at all. Lisa McCully was another “victim”. What was she doing with her life right up until she died? She was giving her life to her two children and giving her life to her elementary school children. She was not a victim; she was laying down her life freely for the benefit of others. What about the family of three, the Tucks? Aaron, Jolene, and their 17-year old daughter, Emily, had deliberately moved to Nova Scotia to be closer to Aaron’s sick mother. They were more than victims. The Son of Man has the power to lay down his life and take it up again. The Tucks had the power to help a sick woman by moving to Nova Scotia or not to move here. They freely chose to move here. Emily, the 17-year old, played the violin on YouTube to lift the spirits of those shut in by the pandemic. She was giving her life long before it could be taken. What about Tom Bagley? A victim? This man, also killed by the shooter, was on his way to helping others in West Wentworth as he stopped at the scene of an explosion. The killer, like Pilate, was too late. Tom was already giving his life freely before the killer could take it. I could go on. So, how does this gospel story end? What does Jesus have to do? The one thing the disciples did not do…he broke bread with them again. All they had to say was, “Stay with us.”

All those who have gone before us in death were not reputations, victims, failures, and dead people. They, like Jesus, were food for our lives. We ate their body and drank their blood. Not once did I sink my fangs into my mother’s neck, before she died, but I drank her blood, over and over and over again. I never chewed on her arm, but I did eat her body, over and over and over again. After 18 years, I have not felt one tinge of sadness in her passing, only gratitude. Sadness keeps you in Emmaus, “no man’s land.” Gratitude, on the other hand, makes you rise up and return to Jerusalem where every tear will be wiped away and where the banquet table is always overflowing.