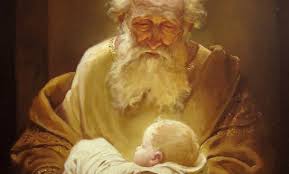 By next Sunday you will have figured out that our scripture readings are not chronological. This gospel passage is about Mary and Joseph presenting the baby Jesus in the Temple 40 days after his birth. Next Sunday, we are back to the Wise Men who saw the star above Bethlehem and are trying to find the new-born King. These wisemen are exactly that, wise men, and nowhere in Scripture are they called kings even though we still like to sing the song “We Three Kings.” So, they are not kings. King Herod is called a king, but he is an evil king, so he is not a real king either. But today’s gospel gives us a real king, the old Simeon, and a real queen, the old Anna.

The father of archetypal psychology was the great psychologist Carl Jung. Archetypes are ruling images deep within the sub-conscious of each of us, and when we are in touch with them, they have great power to help us grow into all we were meant to be. There is the archetype of a warrior in each of us, as well as a lover, a magician or sometimes called wise man/woman (magician comes from the word Magi), and there is a king or queen within us that takes at least 50 years to fully develop. What I say here about the king, only because I’m trying to get in touch with the king in my own life, applies equally to the queen in you women. The king’s role is to bring abundance to the realm and to bless his subjects. The king holds audiences not to be seen but to see and to take delight in his subjects. Maybe you have seen the pope or a bishop walking down the aisle blessing people; that’s his role. When he does that, he is aligning with the archetype of the king within him.

The old word for blessing was benediction. Bene means well; diction means to speak. So, to pronounce a blessing over someone is to speak well of that person. By the way, priests are not the only ones who can bless. We can all bless; we can all speak well of others if we choose to. Remember, at your baptism you were made a priest, prophet, and king/queen. It wasn’t for nothing; it was so that you could bless others. That is why you have king or queen power within you—so you can bless. Young people, although they will never ask for it, desperately need and want the blessing only their elders can give. Young people are like Mary and Joseph; they need the blessing of Simeon and Anna, the elders of the community.

Early one morning, a few years ago, while on a Men’s Rite of Passage retreat in California, those who were grandfathers, in the large group of men, were asked to stand. I had a feeling that we were going to start our day by blessing these men. I was wrong. Instead, they were asked to stand, to stretch out their hands, and bless the rest of us. Without knowing it, they needed to give the blessing. And the rest of us, without knowing it, needed to receive it. The reason we didn’t know we needed it was because archetypes live at the sub-conscious level and have to be deliberately called up or we will miss them. But just because they reside at the sub-conscious level does not mean, for one moment, that there are not powerful. They are.

The great explorer of the 15th and 16th centuries would never think of leaving their home country of Spain, Holland, England or France without first receiving the blessing of the King or Queen. It was not formality or protocol; it was the power of the archetype at work long before the world ever knew about archetypal psychology.

When a young adult leaves home to go to university or to make a life of their own apart from their parents, they are that explorer. In that moment they will not ask for a blessing, but they are desperately hoping for one from their parents, their king, their queen. They are looking for the parent to speak well of them, to offer them words or encouragement, hope, and support.

This baby, Jesus, will grow up and become an adult. The very first words out of his adult mouth, as he begins his public ministry, are words of blessing. Blessed are you when you are poor, when you mourn, when you are hungry and thirsty, when people hate you, when others abuse you, and when you are persecuted. In all these circumstances, you are still God’s beloved, blessed, someone in whom God takes delight. You are always blessed, no matter what your circumstances in life.  Imagine, Jesus himself, the Son of God, needed to hear those words of blessing also. So, before he began his public ministry, like an explorer going out to a new world, he was blessed at his baptism with God speaking well of him: “You are my beloved; on you my favor rest.”

Blessings are needed at the beginning of every new venture and especially when we are young. Psychologists, psychiatrists, counsellors, and therapists of all kinds have concluded that 85% of our personality is formed or deformed by the time we are five years old. We either got off to a good start living under the blessing or a bad start living under a curse. The prisons are full of men who never had a good king to bless them, no one to speak well of them when they were young and needed it the most. They never asked for the blessing, but every one of them hoped for it. The lack of a father’s blessing is one of the deepest wounds in the whole world. Without it we carry a deep wound and a deep hunger for the rest of our lives.

Fr. William Bausch of New Jersey tells a story of one of his parishioners, a 100-year-old man who went by the nickname Rexall. The old man’s real name is Bernum. When Bernum was a child, almost 100 years ago, he was taken to see his great-great-grandmother. It was a hot summer day, the trip was long, and he really did not want to go see an old woman. To make things worse, she was blind and looked mean. At first he was afraid of her. Because she could not see, she said to Bernum’s parents, “Bring the boy over here.” They practically had to push him across the room toward her. The boy was initially afraid of the old woman’s bony hands but, surprisingly, they were gentle. She carefully traced the outline of his face and ran her fingers through his hair. And then in a voice filled with love and acceptance, he heard her whisper, “This boy is one of ours. This boy is part of our family. This one belongs to us.” This boy eventually grows up, his parents die, and he spends most of his life as he says, “turning my back on God.” When he is around 80 years old, weighed down with emptiness, he stops into a church and stares at a statue of Jesus looking down upon him. Suddenly the words of his childhood came back to him, only this time in the mouth of Jesus: “This boy is one of ours. This boy is part of the family. This one belongs to us.” He began to weep because he knew he was home. Eventually, Bernum, moves into a tiny apartment above the Rexall Drug store, hence his nickname “Rexall”. He is alone except for a few neighbours and the “meals on wheels” folks who visit him. He prays every day. And since he can’t sleep, he goes to the little bay window over the store, makes the sign of the cross and blesses the world. Rexall is like Simeon of old blessing the Christ Child and, knowing deep down, he needs the Christ Child’s blessing as well.