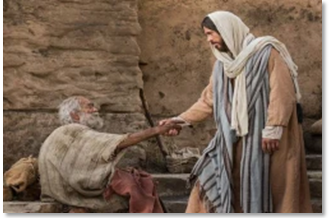 There is an expression that says: “People don’t care how much you know until they know how much you care.” It’s a little play on words, but there is a lot of truth packed into that expression. What does Jesus care about? Doing the will of God. And what is at the center of God’s will? God’s will–God’s great desire–is that we, individually and collectively, be made whole. That we be restored in our relationship with God, with neighbour, with ourself, and with the earth. At any given time, including this very moment, everyone of us is struggling to improve at least one of those relationships. We wish it could flow just a little easier. God wants all of humanity restored and will not stop until the last lost sheep is brought home, the last restoration is completed. We would label God “excessive compulsive.”

For the Jewish people, God’s “holy people,” holiness and wholeness went together. Anything that was marred, defective, or infected lacked wholeness and so was excluded from society and worship. Leprosy was one such thing that excluded you until you presented yourself to the priest who alone deemed whether or not you had a clean bill of health. In telling the once-leprous-now-healed man to present himself to the priest, Jesus comes across as highly traditional. He is following, to a tee, the tradition of his Jewish faith. Yet, at other times, he looks like a flaming liberal when he cures people on the Sabbath and even sanctions his disciples to pick corn on the Sabbath, both being serious violations of Jewish law.

Jesus is not kowtowing to one group one time and to another group another time like some politicians whose only goal is to win approval and get votes. Jesus is not playing the conservative game to appeal to the conservatives nor the liberal game to charm the liberals. In fact, he is not playing any game at all. He is only trying to be faithful to God by doing God’s will. That is why he dies on the cross with his arms stretched out. He’s saying, “You people on the right have some of the truth, but not all the truth; and you people on the left, also have some of the truth, but not all of the truth.” Jesus is holding us all together in a bigger truth and a bigger love than our group or our denomination ever imagined possible.

How is this possible? It is possible because it is Jesus’ over-riding love for the human person, virtuous or sinful, leprous or clean, that guides all his decisions and actions. Jesus knows the Jewish laws and the consequences of breaking the law. He is not naïve; he knows what he is about. But, he also knows that the rules of the Sabbath were made to serve human wholeness, and humans were not made simply to keep the rules of the Sabbath intact at all cost. When you know this and try to live by this, expect to be crucified by both the people on the left and the people on the right for not siding with their group exclusively.

St. Paul says in that second reading, “Do everything for the glory of God.” Everything? That is a tall order and one we are bound to fail in without God’s grace. Yet, Jesus does everything for the glory of God. It is God’s glory that this leper be made clean. God is glorified when humans are restored to wholeness. It is not just a matter of having an infection disappear; a good dermatologist can do that. It is about being restored to your faith community and the broader society.

Notice the exchange between the leperous man and Jesus. The leper reaches out and says, “If you choose, you can make me clean.” He knows there is a distinct possibility that Jesus may choose not to make him clean. In the leper’s mind, it is not a question of power; it is a question of desire. In other words, he is saying to Jesus, “I know you can do it, but I don’t know if you want to do it. I know you have enough power to do it, but I don’t know if you have enough desire to do it. I know you are aware of what the Jewish law say about touching lepers, but I don’t know if I am important enough in your mind to risk breaking the law.” To which Jesus responds, “I do choose. Be made clean!”