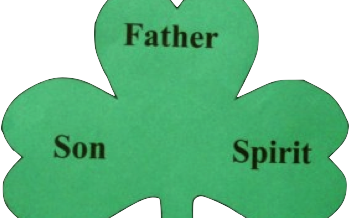 Worldwide, the Church celebrates the Solemnity of the Most Holy Trinity today. Theologians, saints, and mystics have tried to describe the Trinity, three persons in one God, in various ways. St. Patrick apparently used the cloverleaf as his teaching tool. Others have used the comparison of H2O; water comes in the forms of a gas, a liquid, and a solid. As helpful as descriptions are, they are not what people really want in life. People do not want a description of Trinity as much as they want an experience of Trinity. People do not want a description of God; they want an experience of God. Besides, we will never find the perfect metaphor to describe God anyway, and even if we did, we would still ask, “So what? What does that metaphor have to say to my life experiences?” Let’s see if we can move beyond description and entertain the possibility of experiencing Trinity.

In the second reading today, Paul’s Second Letter to the Corinthians, we find one of only a few places in Scripture that the concept of Trinity is referred to even though the word “Trinity” is mentioned nowhere in the entire Bible.  Paul’s prayer and hope are that these three things will remain with his listeners: 1) “The grace of the Lord Jesus Christ, 2) the love of God, and 3) the communion of the Holy Spirit be with all of you.” You have heard that greeting many times as one of the options that the priest uses at the beginning of Mass. So, let us look at that greeting not as a way of understanding Trinity better, but as an invitation to a greater experience of Trinity.

Here’s a story that reminds me of Trinity.

Chush is a school for Yiddish-speaking Orthodox Hasidic Jews in Brooklyn, N.Y. It caters to children with learning disabilities. At a Chush fundraiser dinner, the father of a Chush child delivered a speech that would never be forgotten by all who attended. After extolling the school and its dedicated staff, he cried out, “Where is the perfection in my son, Shaya? Everything God does is done with perfection. But my child cannot understand things as other children do. My child cannot remember facts and figures as other children do. Where is God’s perfection?” The audience was shocked by the question, pained by the father’s anguish, and stilled by the piercing query.

“I believe,” the father answered, “that when God brings a child like this into the world, the perfection that He seeks is in the way people react to this child.” He then told the following story about his son, Shaya.

One afternoon Shaya and his father walked past a park where some boys Shaya knew were playing baseball. Shaya asked, “Do you think they’ll let me play?” Shaya’s father knew that his son was not at all athletic and that most of the boys would not want him on their team. But Shaya’s father understood that if his son was chosen to play, it would give him a sense of belonging. Shaya’s father approached one of the boys on the field and asked if Shaya could play. The boy looked around for guidance from his teammates. Getting none, he took matters into his own hands and said, “We’re losing by six runs, and the game is in the eighth inning. I guess he can be on our team, and we’ll try to put him up to bat in the ninth inning.”

Shaya’s father was ecstatic as Shaya smiled broadly. Shaya was told to put on a glove and to go and play in center field. In the bottom of the eighth inning, Shaya’s team scored a few runs but was still behind by three. In the bottom of the ninth inning, Shaya’s team scored again, and now had two outs and the bases loaded, with the potential winning run on base, Shaya was scheduled to be up. Would the team actually let Shaya bat at this juncture and give away their chance to win the game?

Surprisingly, Shaya was given the bat. Everyone knew that it was all but impossible because Shaya didn’t even know how to hold the bat properly, let alone hit with it. However, as Shaya stepped up to the plate, the pitcher moved a few steps to lob the ball in softly so Shaya could at least be able to make contact. The first pitch came in, and Shaya swung clumsily and missed. One of Shaya’s teammates came up to Shaya, and together they held the bat and faced the pitcher waiting for the next pitch. The pitcher again took a few steps forward to toss the ball softly to Shaya. As the pitch came in, Shaya and his teammate swung the bat, and together they hit a slow ground ball to the pitcher. The pitcher picked up the soft grounder and could easily have thrown the ball to the first baseman. Shaya would have been out and that would have ended the game. Instead, the pitcher took the ball and threw it on a high arc to right field far beyond the reach of the first baseman. Everyone started yelling, “Shaya, run to first.” Never in his life had Shaya run to first. He scampered down the baseline wide-eyed and startled. By the time he reached the first base, the right-fielder had the ball. He could have thrown the ball to the second baseman who would tag out Shaya, who was still running.

But the right-fielder understood what the pitcher’s intentions were, so he threw the ball high and far over the third baseman’s head. Everyone yelled, “Run to second, run to second.” Shaya ran toward second base as the runners ahead of him deliriously circled the bases toward home. As Shaya reached second base, the opposing shortstop ran to him, turned him in the direction of third base, and shouted, “Run to third.” As Shaya rounded third, the boys from both teams ran behind him screaming, “Shaya, run home.” Shaya ran home, stepped on home plate, and all 18 boys lifted him on their shoulders and made him the hero, as he had just hit a “grand slam” and won the game for his team.

“That day,” said the father softly with tears rolling down his face, “those 18 boys reached their level of God’s perfection.”

Apart from an experience of the Holy Trinity, we will never know perfection in our lives. In my more sober and honest moments, I just know that I am not the poster boy for anything perfect. But I am the poster boy for one thing—God’s grace. It is the grace of Jesus Christ, the love of God, and the communion of the Holy Spirit that keeps me running the bases of life. It’s the one and only Trinity that inhabited the hearts of those 18 boys on the day Shaya hit his “grand slam.” They did not know what Trinity was, anymore than I do, but they had an experience of it that would remains with them the rest of their lives.