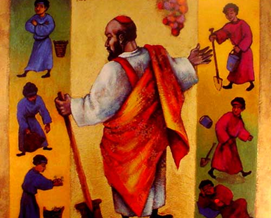 As you just heard, the tax collectors and prostitutes are going into the kingdom of God ahead of us. If this was a parable to be taken literally, I would be encouraging you all to work for Revenue Canada or to don fishnet stocking and hang out on street corners. The underlying message, nonetheless, is to be taken seriously. Jesus is addressing the chief priests and the elders, those who are supposed to be doing it all correctly, yet find themselves at the back of the line. The tax collectors and prostitutes, who appear to be doing it all wrong, are at the front of the line in the kingdom of God.

What kind of a kingdom is this? It is a kingdom where everyone is radically loved equally. We got a glimpse of that kingdom in last Sunday’s gospel parable where everyone who worked in the vineyard received the absolute maximum pay (Mt. 20:1-16). Today’s parable, you may have noticed, also takes place in a vineyard. In the Bible, vines and vineyards stand for the people of Israel, God’s Chose People. I have no doubt, the Jews are God’s Chosen People. But the point of being chosen is not to sit in your chosen superiority and take privilege for yourself. The point is to reveal to others that they, too, are chosen. The reason you can see the chosen-ness in others is because you are in touch with it within yourself. Or to put it another way: You are special, but you are not more special than someone else.

Let’s get into this parable by way of another parable. You are all familiar with one of the most popular stories in the entire Bible—the parable of the Prodigal Son. It appears only in Luke’s Gospel (Lk. 15:11-32). It is a story of the Father’s equal love for both his sons. Twice in the story, as you may recall, does the father go outside the house to retrieve a wayward son. Like the landowner in last Sunday’s gospel who gives everyone everything, the father in the Prodigal Son parable also gives both sons everything he has. If fact he says so, when he tells them, “Everything I have is yours.” There are no favorites. Whether you screw everything up like the younger son clearly does, or you do everything right like the older son, it makes no difference to God and to the amount of love that God garnishes on you. God has no favorites.

No one, except Jesus, has lived a life of perfect integrity, even though being men and women of integrity is what we should be aiming for. While Jesus praises the first son, neither son is a man of integrity. Like the sons in the Prodigal Son story, they both fail; neither did what he said he would do. Why does Jesus praise the first son, the son who showed up for work, even though he initially said he would not? It is because this son left room around the edges of his decision for discernment. He left a little room around his decision for the Spirit to work in his life. In short, he left just enough room to question his previous decision. Somehow, he knew his final answer might not be his final answer. He just knew he didn’t know it all. It is O.K. to change our minds. Jesus even praises the tax collectors and prostitutes for their ability to change their minds whereas the chief priests and elders would not change their minds even at the urging of John the Baptist who came into their lives as a righteous one.

I am increasingly more and more O.K. with politicians who change the minds. I do not have to call them “flip-floppers.” We may have believed something five years ago, but in the interim have grown with deeper insights that we did not have five years ago. And, so, a change of mind is needed. That is what happened to the first son. He used the time to discern what was really important and changed his mind and so is praised. But before we write the second son off as a “yes-man” who is all talk and no action, we need to pause and reflect on how much the father loves each of his sons equally.

If we were honest, most of us would have to admit we are much more like the second son, the one who did not follow up his words with actions, than we are like the first son. When you can admit that, then you know you are living much more by the grace of God than you are living by your own willpower. I am so glad the Church grants annulments when it does. Some people said “yes” on their wedding day, but for whatever reason were not able to see their commitment through. Sticking with marriage, an abused woman never said “I do” to spousal abuse on her wedding day and so should not feel guilty for not fulfilling her wedding vows. A man should not feel guilty for falling in love even though he initially promised his dying wife that upon her death he would never remarry. Sometimes we fully intend to work in the vineyard, but for whatever reason we cannot live up to our promise. The ideal always is to match our words with our actions. But the good news in this parable, just like the parable of the Prodigal Son, is that God’s mercy is deeper and more powerful than our ability to live lives of integrity. If God is that merciful to us, shouldn’t we be as merciful to one another? After all, at the end of the day, we are all living much more by God’s grace than by our own willpower.