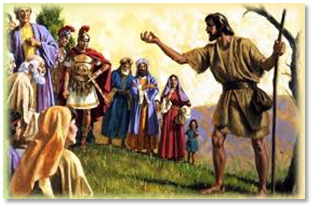 I have not met this person, but I have read a small fraction of her work. Her name is Paula D’Arcy, and a few of her roles in life is that she is a mother, a widow, an author, a retreat leader, and a grief counselor. Back in 1975 when Paula was 27, police officers, out of the blue, came to her door to tell her that her husband and 21-month-old daughter had been tragically killed in a car accident. Paula was half-way through a pregnancy when she got this terrible news. In a very short time, she buried her husband, her daughter, gave birth to a second daughter, and became a single mom and widow.

In today’s gospel, when the crowd came to John the Baptist and asked, “What should we do?” they were ready for something more. When the tax collectors and soldiers asked the same question, “Teacher, what should we do?” they, too, were ready for 2nd half of life spirituality. The vast majority of people still coming to church are ready for 2nd half of life spirituality, but the tragedy is that many of us in leadership feed them with food from the 1st half of life, only to find it no longer satisfies their deeper hungers.

One of the things that moves us into the 2nd half of life spirituality is a crisis—like what happened to Paula D’Arcy. Something has to fall apart that we cannot put back together again with our own resources. Something needs fixing, but we don’t have the right tool in our toolbox to fix it. In that moment, our answers—that served us well up to this point—cannot satisfy the question we are struggling with. Often times the question comes in one of these two forms, “Why is this happening to me?” or “Is there not something more to life than this?” I believe the crowd, the tax collectors and the soldiers, in today’s gospel passage, were no longer satisfied with the mediocrity of their lives and longed for something more–some deeper meaning, some greater purpose. They were 2nd half of life people who knew that the status quo—the answers that fed their earlier life—no longer satisfied their current hunger. John made it clear that he wasn’t the answer to their deeper longings, but that one is coming, named Jesus, and he will put the Holy Spirit and fire back into their lives. Water was fine, but what they hungered for was Spirit and fire!

There is an expression in the spiritual life that says, “In the first half of life, we fight the devil; in the second half of life, we fight God.” In the first half of life, we are so sure we are light fighting the darkness; we are on the side of God fighting the devil, who is clearly the enemy. When we are young, we are so sure about who are the good guys and who are the bad guys. I think most of us, who went on to become priests, entered the seminary with the mentality that our lives and our ministry would be dedicated to fighting the devil, eradicating evil. We all knew right from wrong, and we were going to be loyal soldiers working alongside God doing God’s work. While we are living in that first half of life spirituality–a necessary stage in everybody’s life–it’s pretty much a black and white world. We have our set answers that get us going in life, and we don’t see any reason why those answers won’t serve us for the rest of our lives. Everything and everyone have a pre-assigned place in life, and if everyone would just follow the rules and stay inside the box, we’ll all be better for it in the end. Everything depends on me and you flexing our moral muscles and trying our best. If we fail, it’s’ because we’re not trying hard enough. Smarten up! It’s all very well-defined, in the 1st half of life spirituality, that we are on the side of God and the devil is the enemy. Everything is clear cut. Winning against the devil, at least now and again, solidifies the ego and gives it personal satisfaction. This battle against the devil gives us the illusion that we are winning.

In the second half of life, we don’t fight the devil; we fight God. In that battle, God always wins. This second battle, the one with God, is actually the defeat of our ego. The ego just hates losing, even to God. Battling with God, who ultimately wins, is the only battle worth having, but God allows us to fight the devil for the time being.

Some struggle, some tragedy, some un-fixable problem enters, uninvited, into each of our lives, like the death of Paula D’Arcy’s husband and daughter. We usually don’t gracefully walk into second half of life spirituality under our own steam. Normally life drags us there against our will. What was once black and white, right or wrong, good or bad, hero or villain is not so clear as experience teaches us. The waters are muddied. The spouse, the children, the marriage, the career, the poor health were not supposed to unfold this way. The tendency is to revert back to 1st half of life spirituality in order to try and make sense of it. Jesus in his own way warns against this when he tells us that new wine requires new wineskins, not old ones. When life happens, when we fall apart, the invitation is afoot in the land. If we take the invitation God offer us, we begin to live with paradox and contradictions in a more peaceful way. The Spirit in you allows you to trust that there’s a reason for everything that happens in your life; God is even in this!

In the 2nd half of spirituality your concern is not so much to have what you love anymore, but to love what you have—right now. That’s the litmus test of whether you are in the second half of life at all.

Another sign you’ve moved into the 2nd half of life spirituality is that forgiveness comes easier. We just know we need to forgive those who have hurt us, forgive ourselves for our own failings, forgive life for not being fully fair, and forgive God for seemingly being so indifferent to our wounds.

Lastly, as you move into 2nd half of life spirituality, you don’t even need your own “visions” (of how life was supposed to unfold) because you now participate in God’s vision for you. With that, the wonderful dreaming and the dreamer that you were in your early years have morphed into God’s dream for you. So, come to the desert not with ready-made answers, but with an openness to the one who offers you nothing less than fire and his very own Spirit.