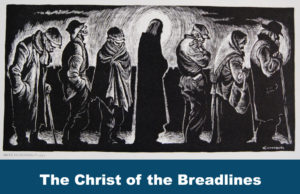 Back in the summers of 1982 and 1983, I convinced parishioners from my home parish to join me on the weekends to serve at St. Bridget’s Soup Kitchen in Ottawa’s Byward Market.  This image entitled “Christ of the Breadlines” hung on one of the walls and it has stayed in my mind for the past 35 years.  Though a print, the original was an engraving by the late Fritz Eichenberg  (1901 – 1990).  Fritz was a Jew from Cologne, Germany who left Europe in 1933 when Hitler came to power. Landing in America, he became an illustrator and wood engraver.  After Fritz’s wife died in 1937, he explored other religions and eventually became a Christian with the Religious Society of Friends (Quakers). In time, he became friends with Dorothy Day and frequently contributed illustration in Day’s newspaper, the Catholic Worker.  His best-known works were concerned with religion, social justice and nonviolence. Eichenberg’s “Christ of the Breadlines” along with “The Lord’s Supper” (Google these for a better look) speak to me about Jesus’ wide, all-inclusive guest list.  Jesus tells us to go out to the highways and byways to invite any and all to his banquet. It seems that hunger was the only criteria Jesus looked for when he ate with the tax collectors, the lepers, the poor, the outcasts, and the prostitutes.

If Christ fed the likes of these, and we are supposed to be the Body of Christ, should we not do the same? Apart from their hunger, the only other common feature was that they were all sinners. “Hungry sinners” —that’s who they were. That’s who we are. The gathering of hungry sinners is still the best description for Eucharistic. Most often sinners are hungrier than “saints”.

God provides the food; we provide the hunger. I long for the day when we as Church would welcome “hungry sinners” to share in the Table as readily as Jesus did. Or will small questions concerning denomination or annulments continue to crowd out the bigger question… “Are you hungry?”