Message in a Bottle #4 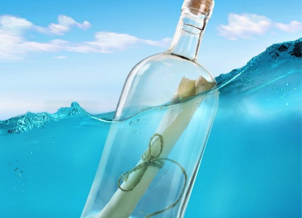 Every Holy Week, the “Passion of our Lord Jesus Christ” is proclaimed twice — once on Passion/Palm Sunday to begin Holy Week and again, on Good Friday.  This year, had we been able to gather, we would have heard the passion readings of gospel writers Matthew (Passion Sunday) and John (Good Friday).  However, in the midst of these trying times, there is a line, found only in Luke’s passion reading, that really speaks to me.

The context is this: Jesus is in the Garden of Gethsemane just prior to his arrest, and he’s about to pray.  Then Jesus withdrew from them (Peter, James and John) about a stone’s throw away, knelt down and prayed…” (Luke 22: 41)

When you were writing a final exam at school, it was only you and the page of exam questions in front of you.  In that moment, it came down to just you.  And if you got stuck, you knew that no one could help you.  You were on your own.  You were a stone’s throw away.

Women who have given birth know this.  No one but you could have endured what you did in the moment leading up to and during the birthing.  The expectant father, who took a Lamaze birthing course and kept saying as he held your hand, “Breathe, breathe, you can do it” was only somewhat helpful (or absolutely useless!). You remember something of what your mother told you about the process, but you also knew that each birthing is absolutely unique.  Her advice is, at best, relative.  It is you, and you alone, not your mother, your sister, or your best friend who is giving birth at that moment.  In that moment, you were a stone’s throw away.

When you are grieving the loss of a loved one, there was something so deeply personal about the way pain coursed through each of us, that all the condolence cards, all the kind words, and all the well-intended gestures, still do not circumvent your grief. When you found yourself saying, “Nothing could have prepared me for this,” you knew you are a stone’s throw away. You were grasping for a life preserver that was out of reach.

When you suffer depression and darkness is everywhere, you are a stone’s throw away from joy as you once knew it.  That joy, that previously was so accessible, now seems locked away.  In fact, even the simplest joys seem like mirages not even worth getting excited about anymore. Thank goodness for medication, therapy, faith, and perhaps the best thing of all…a good friend who knows how to listen. For without these, some people see suicide as the only option.  By that point, the depression has convinced the sufferer that a chasm has formed between them and the land of hope, a chasm that can never be bridged.

I always believed, and still believe, in something called the “ministry of presence.” Basically, what it means is that we should never underestimate the benefit of simply being present to someone in need even if we cannot do anything to lessen or eliminate their suffering.  Just being with someone in their darkness, without the hope of taking away their darkness, brings the sufferer solace.

Back in the summer of 1992, I lived at one of the houses in the L’Arche community called Daybreak, in Richmond Hill, Ontario.  As assistants to the mentally challenged people we were living with, we were all trying to form a home for them based on love, forgiveness and acceptance. My bedroom in the basement with a futon lay on the floor against a wall. In the room next to me was a mentally challenged
72-year old man named Lloyd. Biblically, he was the suffering servant who bore pain in his body during the day and even more pain in his mind at night. Sleeping gave him no rest at all as he would be woken nightly with terrifying psychotic episodes that caused him to moan and cry out.  The medication helped only to a degree. When I would ask him in the morning how he slept, he would always say, “Fine.” After just two nights of this, I wanted to enter his room to comfort Lloyd with my presence and to assure him, like a parent would a child, that everything would be O.K.  I was warned by the house leader never to do this.  Lloyd’s mind would perceive me as a monster coming to finish him off in the middle of the night.  So much for the “ministry of presence.”  I felt useless. I could only pray for him from my side of the wall. Lloyd, like Jesus in the Garden of Gethsemane, was a stone’s throw away.

Perhaps COVID-19 has us all feeling like we are a stone’s throw away.  There is a suffering we didn’t ask for and a pain we didn’t cause, yet the remedy is still out of reach…at least for now.  But like all pain, this too will pass. And when it does pass, only these will remain: faith, hope and love.

While we do our best to support each other from a safe distance, there is still a part of this whole mess that each of us has to go through alone, like Jesus and like Lloyd. While the “ministry of presence” seems to be temporarily blocked, the wall between us is highly permeable to prayer. Though he was a stone’s throw away, an angel from heaven appeared to Jesus and gave him strength (Luke 22:43).  Angels are prominent in Scripture. Like God, they have no regard or respect for boundaries and borders, for they are God’s emissaries. They transgress walls, contravene orders to stay two metres apart, and even enter tombs to announce God’s closeness to all people. Pray and expect to be visited by an angel tonight.