Message in a Bottle #8 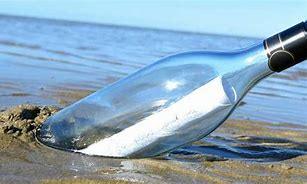 I am not sure if this story is in any of Fr. Richard Rohr’s numerous books or not, but he does tell it on a C.D. retreat talk entitled “Fire from Heaven.” It goes like this.

“There is a story that an artesian well had sprung up in the middle of the desert, and it was a marvelous well with clear, nourishing, and copious water. People began to come and to drink and to celebrate their wonderful discovery of a well in the desert. Gradually they built a building over the well. They walled it off. They developed ceremonies to celebrate their good fortune of finding an oasis in the desert. They wrote official versions of how it was discovered. They spun fantastic tales about the effects of the water. But the water, actually, over the next few months, had ceased to flow. But hardly anyone noticed that the water actually wasn’t flowing anymore, that it begun to diminish and finally it went away. They were so busy building and maintaining the super structure. The water took itself over and burrowed a new channel in the desert, which was just as good, clear and nourishing and life-giving in a totally new and unexpected place. A new group of people found it there and they were also refreshed. But the old group of people just kept telling the story back at the old well, kept maintaining the wall, kept maintaining the building over the well, and actually forgot to realize that the water wasn’t there anymore.”

As part of a closing commentary Fr. Rohr continues, “I don’t think most of our people are accessing the well. And because some of them never drank from the well, they don’t even know they are missing it. And we just keep maintaining the wall around the well, the building over the well, the stories about the well, singing songs of people who once drank at the well. We think we have the water. You gotta want that, and you gotta know you need it.”

Even though the above quotes never mention the word “Church,” it is, nonetheless, the best description of the state of the Church in my lifetime. If we were honest, we would have to admit that we have spent a lot of time and money maintaining wells rather than teaching people how access life-giving water. Rarely do we, in leadership roles, ask the question if there is life-giving water still flowing in all our efforts, or if the water has made a new channel elsewhere. It seems to me we already know the answer but are afraid to admit it to ourselves. After all, it is always easier to maintain the status quo than to put in the effort to change ourselves for the better. While I speak of those in leadership roles, I particularly think of the ordained clergy. I have earned the right to critique them because I am one of them. While our role as clergy is supposed to be both prophetic and priestly, most of us have totally neglected the prophetic dimension of priesthood and, consequently, over-emphasized the priestly dimension.

What is the prophetic dimension? Prophets, whether in the Biblical times or in present times, lead us in the “path of the fall.” They are brutally honest with themselves and with everyone they meet. Prophets, if we heed their message, take away our illusions. They teach us how to go into darkness creatively, how to let things fall apart. They teach us how to lose gracefully, how to let go without fear. They tell us that the building over the well is just a façade over a stream that dried up a long time ago. And, because it is such, it should have been torn down instead of continually draining our resources. Prophets are God’s deconstructionist. They are never popular with the comfortable and those in power. We have fought, and will continue to fight, anyone who threatens our fragile egos and our institutions. Prophets are seen as a threat to both these sacred cows. That is why they are almost always ignored and almost always killed.

What is the priestly dimension? The priests, of both Biblical times and current times, are the ones who lead us in the “path of the return.” (In spirituality, there is always a fall and a return; the dying and rising of everything). After you deconstruct, what are you actually for? Priests help us focus on what we are for. Priests talk of union, communion, love, transcendence, religion, connecting this world with the next, and meaningful existence.  Priests are constructionists. While we usually despise the prophet, we like the priest. It is Fr. Rohr’s opinion, and I wholeheartedly agree, that we have way too much priesthood and not nearly enough prophecy.

An example. Back in my seminary days, we had to go through our own deconstruction and reconstruction journey. This journey has been true and will continue to be true for anyone who takes their spiritual growth seriously, not just seminarians.

The dynamics of the journey go something like this: In first-year theology class some of the students were scandalize by what their professors were telling them, and so they concluded that those professors must by heretics and should be burned at the stake. After all, everything they say seems to be flying in the face of what mother and my childhood catechists told me. By the end of first year, if you were not totally scandalized, almost everything you believed about God, Jesus, Church, the Bible, and sacraments was laying on the floor in pieces. This was the necessary deconstruction that we all resist. Second year theology students (if they had not dropped out or were not doing jail time) still fought their professors but less. Only by the end of three years of theology did everything come full circle. As a student you were able to integrate your theology into a broader, healthier, and more coherent whole. This was the constructionist phase, the putting-back-together phase.

Not everything your mother or catechists told you was wrong; it wasn’t. It just needed to be broadened and deepened and, most importantly, owned. The rule of thumb is that it takes a minimum of three years of theology for the deconstruction and the reconstruction process to run its course. Anything less than three years of theology, in my mind, is a crash course, a mere reaffirmation of everything your mother taught you and, thus, a halt to any real growth. (Mothers, by the way, are almost single-handedly responsible for getting us going in our faith, but at some point we have to appropriate our faith as adults or we will always look for coddling). To this day we still ordain men who have never met, or listened to, a single prophet in their lives; they only know what mother told them when they were seven. They live as priests and are generally well liked, but because the prophetic dimension of their lives is underdeveloped, they have little depth to offer their parishioners. They are just nice guys, nothing more.

The late Bishop Donat Chiasson told his priests, and I paraphrase, “If I never hear any complaints about you, it’s probably because you are doing nothing!” Priests never get in trouble with their bishops, only prophets. I have met a lot of priests who are doing nothing. You might as well have a robot presiding Eucharist or a trained baboon reading from cue cards. Fortunately, I have also met a few priests—and lay people– who were doing something with their spiritual growth. They allow their vision of God, Church, Jesus, Mary, and the sacraments to be deconstructed and reconstructed a thousand times. These are the ones who can lead us beyond the façade of the Church to the life-giving waters that are burrowing new channels of God’s presence in the world. Let us use this time of pandemic, this time of isolation, well. Let us all go after a dream that is destined to fail without Divine intervention. With the assurance that your dignity will remain intact, allow Jesus to deconstruct any dream you have that you can accomplish with mere human willpower. In its place, allow Jesus to construct in you a dream that is destined to succeed only with God’s help. When we do that, we never have to fear the well going dry.