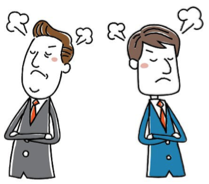 Have you held a grudge against another person, place or thing, whether that grudge be grounded in truth or grounded in gossip? Perhaps you are harbouring a grudge right now. Are you someone who likes to grumble over, find fault with or show dissatisfaction with?  If you are, then you may be a grudge-holder.

My father’s mother died in 2017 at the age of 94, and her mother died at the age of 90 in 1983. For the last 30-odd years of my great-grandmother’s life these women lived two small Nova Scotia towns apart but did not speak to one another over what I was told was a serious quarrel. The quarrel was so serious in fact that my grandmother did not attend my great-grandmother’s funeral in 1983. Of course, you are curious to know the source of this quarrel and I am as well. If you ever find out the reason, please let me know because I have often wondered what could have happened to create this gulf between a mother and a daughter. At the end of their lives I wonder if they themselves remembered the source of the conflict and if it was worth it. Were they in fact aware of the cost?  Who won, I wonder?

I do not intend criticism of these women or to cast them in a negative light. I think they were human, fragile and prone to the same human pitfalls each of us are prone to and were prone to 2,000 years ago when Jesus walked the earth teaching with parables.

I may be the only person who read today’s gospel from Matthew and related better to the slave who grabbed another slave by the throat than I related to Jesus’ instruction to forgive someone 77 times. In the movies and on television at least, grabbing someone by the throat looks normal and satisfying, especially if I am 1,000% certain about how right I am about being wronged.  Forgiveness requires not only love but perspective, and a willingness to let go, all requiring far greater maturity and strength than I have been able to live up to at times.

I have also learned holding a grudge or begrudging someone forgiveness is costly…with the damage carried mainly by me, the grudge-holder, not the person I thought I was holding accountable.

“How can I forgive them for having done that?” you might ask. “They’re not even sorry, and I can never forget what they did.”

“Forgiveness is not about forgetting.  It is about letting go of another person’s throat.”[1]

Others are affected when I hold a grudge against them, but the greatest cost lays on my own shoulders and in my own heart, not the heart and shoulders of the person I am metaphorically holding by the throat, no matter what I might think.

May God’s infinite grace and forgiveness be inspiration for me to share these precious gifts with everyone I encounter, even if my greatest desire is to seize them by the throat.