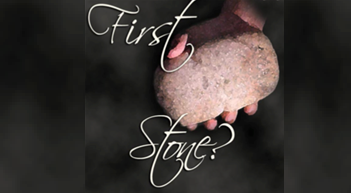 “This is the curiosity about sin – it is far more easily recognized in another than in ourselves.  Matthew’s Gospel asks: “Why do you see the speck in your neighbour’s eye, but do not notice the log in your own?”  (Mt 7:3) Ironic isn’t it, that uncanny ability humans have?  Luke says it differently as we hear today: “Let anyone among you who is without sin be the first to throw a stone at her.”

Many years ago, Wayne and I were preparing our son Marc for the sacrament of reconciliation.  As we explained to him what the sacrament meant, and what was involved in the celebration of it, Marc had great difficulty in understanding what he might do that was wrong.  Interestingly, however, he had no difficulty in recognizing what his younger brother did that was wrong.  My experience leads me to the conclusion that such is true for many of us.

Does it help appease our conscience that we can see the sins of another so easily?  My mother had a great saying: ‘Misery loves company.’  Sinners do also, I expect.   Most often that which we complain about loudest in another is the very struggle we ourselves have.  I’m not suggesting that those who paraded the adulterous woman in front of Jesus and the community were themselves adulterers.  Nevertheless, clearly, they were sinners.  We all are.  It is the human condition.   For Jesus it seems we need not concern ourselves with the sins of another.  Our task is to pay attention to what we ourselves do that harms another, harms ourselves, harms our relationship with God.  Jesus’ challenge is one for us all.  After her accusers had left Jesus and the woman alone, he finally addresses a question to her: ‘Has anyone condemned you? Well, I don’t either.’  “Go your way, and from now on do not sin again.”  Unlikely that she was able to follow that directive – even with the very best of intentions few are.

In the first reading, the prophet Isaiah tells us, “Do not remember the former things, or consider the things of old.  I am about to do a new thing.”  Isn’t that what reconciliation offers us – the chance to do a new thing?  We are not who we were yesterday; we are not who we will be tomorrow.  We are who we are now – only now – and the promise of newness is one that is open to all.

Wayne and I have no idea what Marc talked about in that first confession; we have no real knowledge if he fully comprehended what was happening during the celebration of that sacrament.  But after receiving absolution, he ran down the aisle to us, and shouted, “I’ve been forgiven.”  We have no idea what happened to the woman … John doesn’t tell us, and we don’t hear about her again.  But I would like to think she too ran to those who loved her, shouting the same message Marc did.