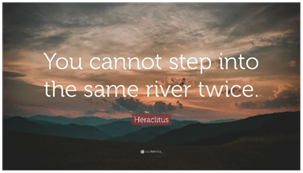 There is an African proverb which states “you cannot put your foot in the same river twice,” but this piece of wisdom can also be found elsewhere with the ancient Greek philosopher Heraclitus (535-475 B.C.) who wrote “it is impossible to step into the same river twice.”

“But I have swam in the Pollett River all my life and it is the same now as it was 50-60 years ago,” you say?  I also swam in the Pollett River as a child, and if I were to return today I am confident it would reflect to me the same pastoral beauty at 45 years of age as it did at the age of 6.  It would remind me of many good times swimming with childhood friends, splashing around and having fun, despite that one time I got caught by the current, enabling a rock to smash directly into my face (with bloody, tearful consequences).  However, I know at a deeper level it would not be the same experience because I am profoundly changed, as is the Pollett River.  Not only has my physical body changed during that time, but more importantly my view of the world has changed as I have grown, matured a little bit, gained some experience, some education, and some perspective.  Also, as a living entity, the river has undergone considerable change in that time.  The water coursing through it is different, as are the stones, sand and sediment, which have all shifted from the force of the streaming water.  Various lifeforms have come and gone, lived and died in this river, having played a role in making it what it is today, a transformed creation of God.

When I was in my early 20’s, my friend Dawn gave me a birthday card showing on the cover a sky-blue, clouded background with several flying pink pigs in the foreground. They looked ridiculous, cartoonish and smiling with angel wings.  On the inside of the card was the printed quote, “If anyone is in Christ, there is a new creation.”  I was a faithful Catholic, but my limited life experience prevented me from understanding the deeper meaning connected to the passage.  I thought “How cute,” and continued to wait for this monumental change that was to take place that would be so significant that I would be rendered almost unrecognizable. It took me many years to understand that while there have been pivotal events in my life which stand out as life-altering, most of my physical and spiritual growth has occurred through whispers…slowly, almost inaudibly and fairly consistent, although usually at such a pace that I was unaware it was taking place.

My mother often used the phrase “hindsight is 20/20,” and I remember former Archbishop of Moncton André Richard reflecting in his homilies on how we see signs along the road as we go along in our faith lives, but we see them better in the rear-view mirror.  However, like stepping through the same river twice, we cannot go back because we have undergone that inevitable change associated with an encounter with Jesus Christ, so like the magi who attended Christ after his birth, we cannot but help to return “by another road1”.