The Scandal of Closeness 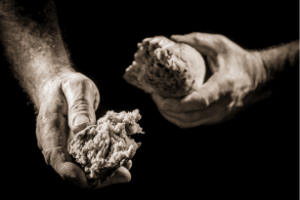 We have just come through one of the two peak seasons in the Church, the Christmas season, and probably feel we are coming down the mountain into a quieter, less-intense time. In seven weeks, we will begin another ascent toward that other peak season–the Season of Easter. What always remains, throughout the entire liturgical year, peak season or not, is the closeness of the Lord.

From the start of his life we are told the Lord’s name: Emmanuel (God-with-us). At the end of the Lord’s earthly life he reminds us–because forgetfulness seems to be our middle name–“I am with you until the end of the ages.” Presence at the beginning, at the end, and presence all the way through. With the giving of his Spirit, the promise of his closeness is never taken back and never will be.

The gospel reading on Christmas Day makes no mention of Mary, Joseph, the manger, rejection at the inn, shepherds, nor angels on high proclaiming good news. Instead, John’s Gospel mentions the Word that has accompanied creation from the very beginning and has never left us. John goes on to say that Word became flesh and how, for the most part, the world rejected it. We did not want flesh, the embodiment of God. We preferred words with which we could proclaim certainties and answers. Arguing over the Interpretation of our human words, rather than opening to the Word, has led us to justify burning people at the stake and carrying through with “holy” wars all, supposedly, in the name of God. Christianity is the only religion that says God became a human body. Yet Gandhi, a Hindu, said, “There are so many hungry people in the world that God could only come into the world in the form of food.” Brilliant.

That repeatable promise of Jesus to feed us and never leave us is what we call Eucharist. Jesus never said, “Think about this,” “Fight about this,” “Stare at this,” but he did say, “Eat this!” It is much easier for God to transform bread than to transform people. The resistance to our own transformation always comes from the ego. The ego lives in a dualistic world and thus is desperate to know who’s in and who’s out, who’s worthy and who’s unworthy. While the true self has long given up asking those questions. Our only ticket or prerequisite for coming to Eucharist is hunger. And most often sinners are more hungry than “saints.”