Through Death & Into Eternal Life 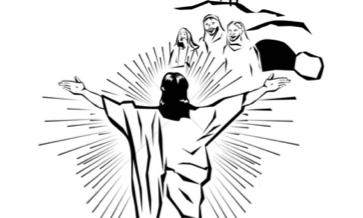 Central to all the beliefs we hold to as Roman Catholic Christians is that Jesus, once dead, is alive forever, and that the “new life” he offers liberates us forever from evil, sin and death. This new life, this salvation, is meant for all peoples of the earth.

This central truth is proclaimed by the Church particularly during these 50 days of Easter. Moreover, it’s meant to be proclaimed by each of us every day of the year by the way we live. The world listening to us, and more importantly watching us, should come to the conclusion: Christ is alive! To say “Christ is risen” does not mean that Jesus’ mortal life had been prolonged. His life after resurrection was so different than the life he lived, for 33 years among his follower, that they never recognize him…at least, not initially. Clearly, he was the same Jesus they had known and followed. They recognized his voice, touched him, and shared meals with him. Yet, there was something bewilderingly different about the risen Jesus. He was no longer subject to the limitations that our mortal natures, his and ours, places upon us. He could enter rooms where the doors were shut. He could appear, break bread, and disappear suddenly.

Equally intriguing is whom Jesus appeared to in his resurrected state and whom he didn’t appear to. He could have appeared to Pilate while Pilate was having breakfast with his wife, who would have turned to him and said, “I told you to have nothing to do with this man.” This would have sent shockwaves through the Roman Empire. He could have shown up at a meeting of the religious leaders, the Sanhedrin, and forced them to believe, through undeniable evidence, that he was alive. He could have appeared to Emperor Tiberius Caesar in Rome with legions of angels at his side. Powerful, convenient, and expedient as these appearances would have been, they never occurred.

Instead, God allowed Jesus to appear “not to all the people, but to those chosen by God as witnesses” (Acts 10:41). God allowed the risen Jesus to appear to only those who had a prior link to Jesus, a previous bond of love and friendship. Those who didn’t know him and those who opposed him during his mortal life simply never got to see him as the Risen One. It’s not that Jesus deliberately avoided some people. It’s just that these people could not see him. Had members of the Sanhedrin or officers of Pilate’s court been in the upper room when the risen Lord appeared to the apostles, I don’t think they would have seen Jesus. At their disposal, the disciples had a “third eye,” the eye of faith. The disciples may have lost hope in Jesus after he died, but they never lost their love and faith in him. And it was this love and faith that gave them the discerning eye that enabled them to recognize him, when other could not. Believe it or not, you are one of God’s chosen witnesses.